Please ensure Javascript is enabled for purposes of website accessibility

It is the geological history of the territory of the aspiring Geopark Algarvensis Loulé-Silves-Albufeira that  allows us to understand its surface and underground landscapes: 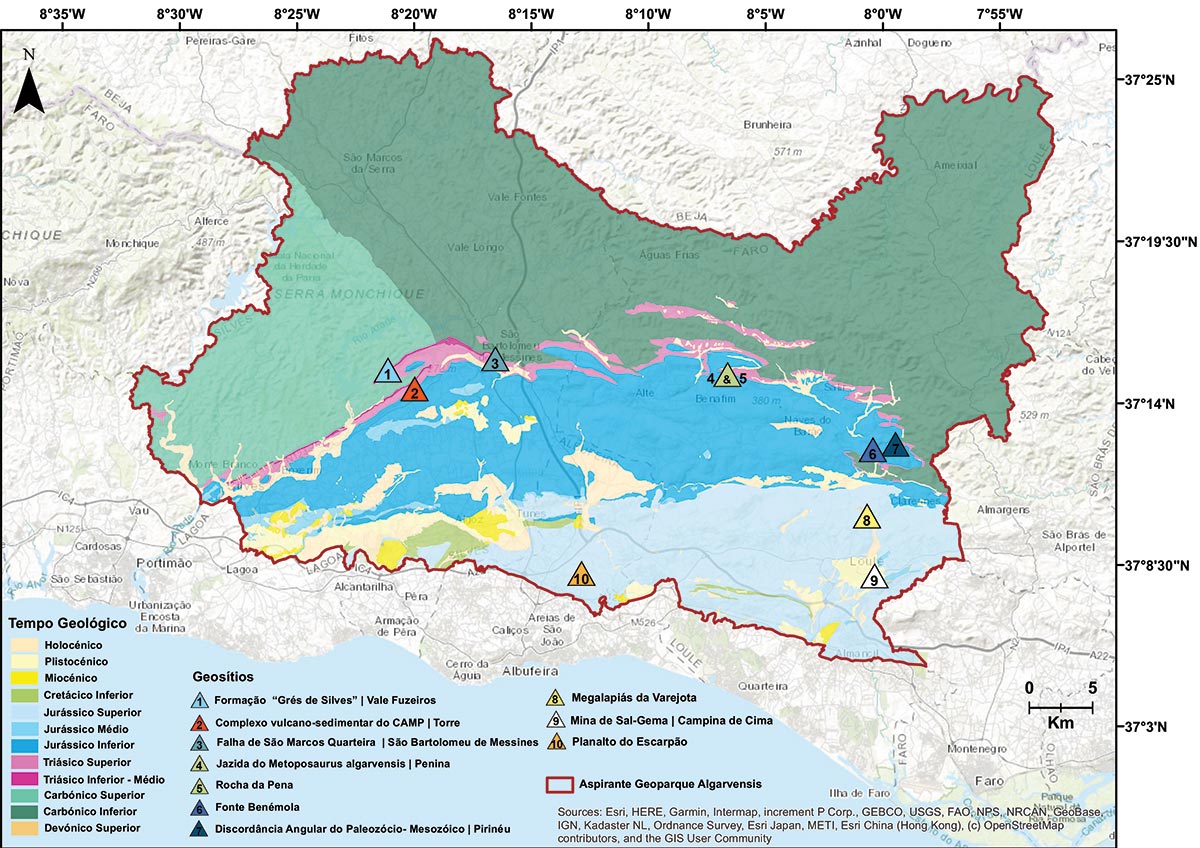 This history began more than 350 million years ago, at the bottom of the Rheic Ocean that separated two great continents, Euramerica and Gondwana, and where, during the Carboniferous period (360 to 300 million years ago), the sediments that originated the clayey schists and greywackes, which characterize the Portuguese South Zone and outcrop in the Algarve Mountains, were deposited. There, the deformation, folds and faults affecting the metamorphic rocks bear witness to the compressive tectonic forces associated with the union of the two supercontinents and the consequent closure of the ancient ocean (See Geosite of Pirinéu).

From the disappearance of this ocean and the collision of the two continents, a great mountain range was formed: the Varisca Chain, and then there was a single supercontinent that extended from pole to pole: Pangea.

It was in this supercontinent that the first species of many animal groups known today emerged. In the lakes and rivers on the eastern margin of Pangea, the reddish sandstones and argillites, typical of the Beira-Serra in the Algarve, were deposited. They are known as "Grés de Silves" (See Geosite Vale Fuseiros), sediments resulting from the gradual erosion that levelled the Varisca mountain chain, mainly during the Permian (300 to 252 million years ago) and Triassic (252 to 200 million years ago) periods.

These sedimentary rocks contain the remains of the unique species that gives its name to this geopark, the Metoposaurus algarvensis, which, of  around 227 million years of age, has only been described so far in this region of the world (See Penina Geosite). In these formations there are also other animal fossils from the Triassic period, such as phytosaurs and placodonts.

Still in the Triassic period, the Atlantic Ocean opened with the fragmentation of Pangea, which led to the drifting of the continental masses that formed this supercontinent and gave origin to the continents and the current global configuration.

All this dynamic, despite the slow evolution of a new oceanic basin until 145 million years ago, led to the accumulation of evaporitic materials (gypsum and rock salt) in the marine environment  (See Geosite Mina de Sal-Gema), to the installation of volcanoes (See Geosite of Torre) and finally to the formation of carbonate sediments (See Geosite of Rocha da Pena), mainly during the Jurassic period.

The rocks generated in the Jurassic ocean are the main physical support of the physiographic unity of the Barrocal, in the so-called Algarve Basin.

At the end of the Middle Jurassic (166 to 157 million years ago), the Algarve Basin underwent important geodynamic events that led to a drop in sea level and marked erosion, linked to vertical crustal movements, and thus transformed its physiography. A shallow marine gulf then developed in a region corresponding today to the Escarpão area in Albufeira, extending through Loulé up to S. Brás and Tavira. The sediments deposited there contain abundant fauna of ammonites from the Bimammatum and Planula zones. The dimensions of this gulf were successively reduced and, in increasingly shallower tropical waters, limestones with silex nodules and large extensions of bioconstructions such as corals, sponges or stromatoporoidea were deposited (See Geosite of Escarpão).

The evolution of the Algarve basin followed its course, and during the first half of the Cretaceous period (145 to 95 million years ago) the sedimentation was mainly detrital of fluvial and lacustrine nature, until about 95 million years ago, the compressive tectonic forces between the Eurasian and African continents resulted in the uplift of the entire Algarve region (See Geosite of the Falha  S. Marcos).

Only in the Miocene period (23 to 5 million years ago), new marine transgressions occurred that made possible the deposition of rocks with fossils which indicate coastal and marine environments with much warmer waters than today.

Later, from the Pliocene period, about 5 million years ago, the territory, which became continental again, will have started to be sculpted by the action of the water, the wind and the organisms over the last million years, giving rise to the deep valleys of the Serra, the magnificent karstic landscapes of the Barrocal (See Varejota Geosite) and the complex Querença-Silves aquifer system (See Fonte Benémola Geosite).